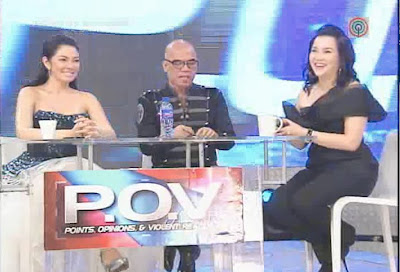 I had dinner with Noy tonight after his tv commercial shoot.
He told me di raw ba pwede na may quiet Sunday kami?
And he asked why sya nadamay when he's not even part of the Buzz
I would like to extend a loving hug to Ruffa.
I viewed the tape and although I still feel I gave my comment with affection.
Maybe it made her feel even worse because she's moving in a new direction.
We had what I believed was a good working relationship in the almost 2 years we were together on the Buzz.
I can also understand why Ruffa's mom dislikes Noynoy and my family.
Maybe because of association and our vocal proclamation of admiration for Dingdong.
And his selfless contribution to help Noy's presidential bid.
It is with Ruffa that I enjoyed a healthy working relationship with.
And I only have good words to say about her.
To Ruffa, I sincerely apologize for causing you hurt.
My brother Noynoy would like to add that we live in a democracy.
One where we are very free to make our own choice for president.
This text came from my sister Pinky : Tomorrow is Women's day.
And March is women's month. Fyi, it was mom who passed laws making this possible.
(Proclamation No. 224 and 227, both signed in March 1988).
And RA 6949 (signed April 1990 - declares March 8 as National Women's Day.
We celebrate women who triumphed despite odds and need to look at ways to further improve.
That's why I want Ruffa to have a great career ahead of her because she is a woman.
Raising two beautiful daughters, and I champion all women who triumph despite the odds.
Just like my own mom.
Noy told me in any election, we'll have our share of supporters and harshest critics.
And if you can't take the heat, then politics isn't for you.
As a woman, and as Ruffa's mom and the lola of Lorin and Venice, I respect you Tita Anabelle.
And on behalf of our family, I apologize for the distress we caused yours.
Hindi po ako mayabang, kaya ako nagpapakumbaba ngayon.
On a last note, I promised Noy that if he does WIN, and I'm a cause of stress for him and his presidency..
I will gladly take my two boys to live anywhere there's TFC.
So that I can continue to work but with our Overseas Filipino brothers and sisters.
Of course Noy said - dinner daw yun - hindi teleserye ko.
I love my family and I'm so grateful to have such a supportive and grounded brother and sisters,
Who have learned to love me for what I am.
Thank you for your time and may god bless all of us with a peaceful weekend.
Labels: Kris Aquino ruffa gutierrez the buzz