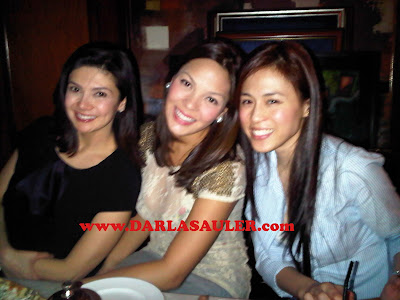 Rumors are spreading now about the alleged rift between The Buzz hosts Toni Gonzaga and Charlene Gonzalez-Muhlach. The issue apparently started from some people’s observations posted in the online community board pinoywap.net, resulting to allegations that Toni’s fans are now saying bad words against Charlene. But both tv hosts were shocked, when they were asked about the intrigue.

Even Charlene made it sure that this rumor is false, and definitely won’t affect their relationship. “Working with Toni, KC (Concepcion) and Tito Boy (Abunda)… It’s been a pleasurable experience. At sobra kaming nag-eenjoy and it’s nice that I was given the opportunity to work with genuinely sincere and kind people in the industry. At habang tumatagal mas mas lumalalim ang friendship namin, kaming apat,” Charlene assured the fans.
Labels: charlene gonzalez-muhlach kc concepcion the buzz toni gonzaga