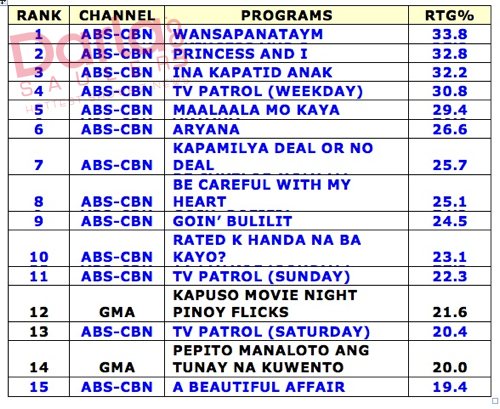 ABS-CBN Corporation, the country’s largest and leading multimedia conglomerate, continued its lead among urban and rural households in the country for the month of November with a total day average national audience share of 41%, or ten points higher than GMA’s 31%, based on data from Kantar Media.

Data also show that ABS-CBN sustained a sharp lead in the core primetime block (6PM-10:30PM) with an average audience share of 47%, or higher than GMA (29%) by 18 percentage points. This block is the most important part of the day when most Filipinos watch TV and advertisers put a larger chunk of their investment in to reach more consumers efficiently.

ABS-CBN also improved on daytime (6AM-6PM) nationwide with an average audience share of 38% from 37% in October, while GMA dropped to 33 from 35%.

Out of the top 15 regularly running programs, ABS-CBN grabbed the 13 out of the 15 spots and captured the top 10. “Wansapanataym” soared high and led the pack with a national TV rating of 36.4%, while “Princess and I” remained strong at 2nd place with 34.2%.

“Maalaala Mo Kaya” remained as the country’s number one drama anthology with a national TV rating of 29.4%, almost twice rival program’s “Magpakailanman” that only fared at 16.8%.

The undisputed leading daytime program “Be Careful With My Heart,” meanwhile, zoomed into November’s top 8 from last month’s top 14. The Jodi Sta. Maria-Richard Yap starrer strengthened to a national TV rating of 25.1% from October’s 23.3%.

Most Filipinos also watched the special airing of Zoren Legaspi’s surprise marriage proposal and wedding to host-actress Carmina Villaroel in “Zoren-Carmina Always, Forever: A Wedding Like No Other,” which aired last November 24 and hit a national TV rating of 22.8%.

Kantar Media is a leading television (TV) audience measurement provider with capabilities in gathering TV viewing data in both digital and analog platforms. It Is a multinational market research group that specializes in audience measurement in more than 80 countries, has 26 TV networks, ad agencies, and pan-regional networks subscribing to its ratings services.

Among these, the following subscribe to both urban and rural TV audience measurement: ABS-CBN, Brand Ideas, MPG Havas, and 720ConsumerConnect.
ABS-CBN shifted to Kantar Media/TNS after filing a case vs. AGB Nielsen Media Research for failing to comply with its request to investigate alleged cheating and data tampering in TV ratings. The case is still pending in court contrary to claims by GMA, which is not a party to the case, that it has been resolved. 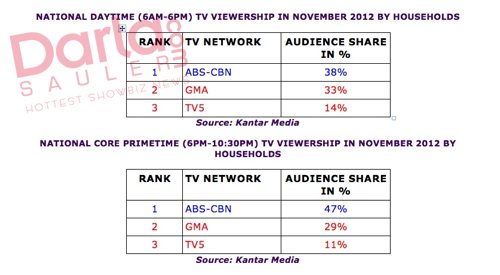 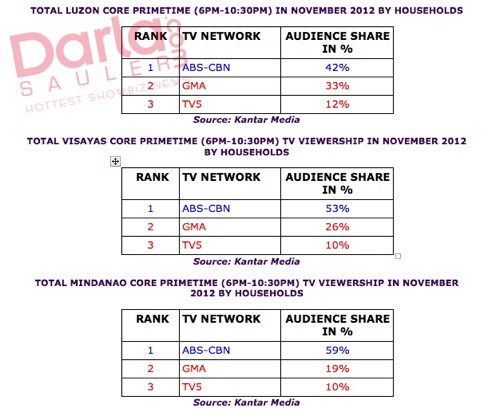