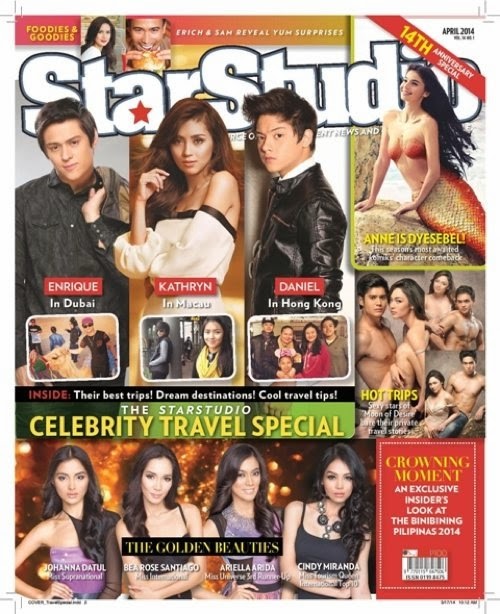 This summer, travel takes on a fun and youthful vibe as three of today’s hottest young stars share their best travel stories and tips as StarStudio presents its Celebrity Travel Special featuring Enrique Gil, Kathryn Bernardo, and Daniel Padilla.
Now on its 14th anniversary and fresh from winning an award for Best Magazine at the 12th Gawad Tanglaw Awards, StarStudio is bringing a jam-packed summer issue as this season’s treat to its readers. Apart from the three young stars on the cover, the magazine digs into the summer plans of the country’s favorite celebrities, including Robi Domingo, Isabelle Daza, Solenn Heusaff, Anne Curtis, Vice Ganda, Ellen Adarna, JC de Vera, Meg Imperial, Dominic Roque, and Miko Raval.
Even husband and wife tandem Julius Babao and Tintin Bersola-Babao dish out their own travel memories complete with exclusive photos from all the places they’ve been together.
This month, StarStudio also goes into the recently conluded Binibining Pilipinas pageant, which celebrated a milestone upon entering its 51st year this 2014. StarStudio teams up with the prestigious pageant organization in an 18-page special that features the pageant and its rich history, with fun facts about this year’s forty beautiful candidates and the preparations they went through prior to the coronation night.
Also in a special feature, StarStudio pays tribute to komiks classic Dyesebel, now making waves on primetime with Anne Curtis in the lead role.


All this and more is in the latest issue of StarStudio magazine, so grab a copy now—available at newsstands and bookstores nationwide. StarStudio’s digital edition is also available on the App Store and on zinio.com.
Labels: celebrity travel daniel padilla enrique gil kathryn bernardo StarStudio Magazine